‘This would make everything easier for everyone, including the truck drivers,’ says Terry Engler

Original story from the CBC – HERE

A Vancouver union president says building a proposed 10-lane bridge isn’t the only solution to easing traffic congestion at the George Massey Tunnel.

Instead, longshoreman Terry Engler said limiting truck traffic coming from nearby port terminals south of the Fraser River is key to reducing traffic.

Engler, who is president of the International Longshore and Warehouse Union Local 400, made the comments to On the Coast guest host Gloria Macarenko.

“This would make everything easier for everyone, including the truck drivers, because they don’t make money when they’re stuck in traffic,” said Engler.

Engler’s comments come on the heels of remarks from Delta Mayor Lois Jackson, who recently renewed her support of a proposed bridge to replace the tunnel.

Jackson is urging the incoming NDP provincial government to support a bridge, which was backed by the outgoing Liberal government.

The Liberals argued that the Massey Tunnel, which runs beneath the Fraser River and links Richmond and Delta, has become a traffic bottleneck and is seismically unsound.

However, most Metro Vancouver mayors have spoken out against building a new bridge.

Engler’s solution hinges on an idea called short sea shipping, a practice currently used throughout Quebec and Europe. It involves using barges to ship products rather than trucks.

Listen to the full interview with Terry Engler:

A local union president says the practice of short sea shipping is needed to reduce congestion at the George Massey Tunnel. 7:08

“Instead of the scenario now where the trucks go and pick up the containers and drive across the city, over bridges and tunnels and block all the traffic, it would be on barges.”

Engler said by using the Lower Mainland’s easily navigable water ways, the barges could transport more than 100 containers per vessel.

He said the barges could move goods from the port in the Fraser River to municipalities in the region through a network of unloading terminals.

From the terminals, Engler said trucks could then transport the shipments to their final destinations such as stores or warehouses.

He says short sea shipping would significantly reduce the distance the trucks would have to drive and in turn reduce congestion. 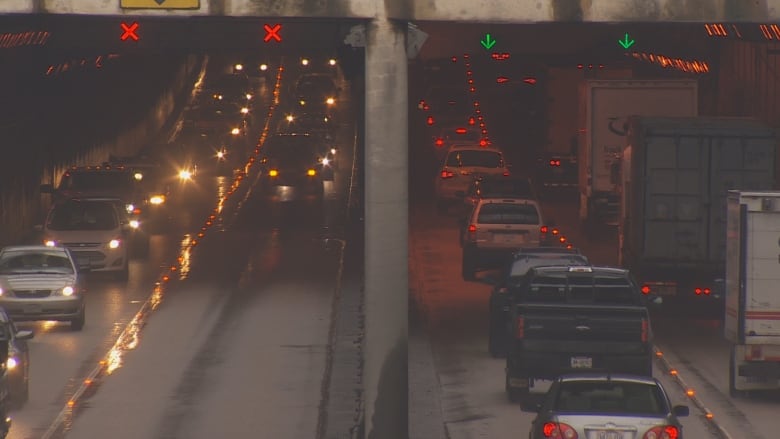 The George Massey Tunnel is a major highway tunnel in Metro Vancouver through which thousands of cars pass every day. (CBC )

In a statement, it said it supports the proposed bridge and noted that much of the traffic in the tunnel includes trucks travelling to and from the United States, businesses outside of the Lower Mainland and large amounts of commuters.

“In general, we are supportive of the project [the bridge] because it will help to ease traffic congestion, including trucks travelling to and from the U.S. as well as port terminals,” said the statement.

But Engler said the value of short sea shipping is undeniable.

“We have one of the best places in the world for navigable waters,” said Engler. “We should use them safely and properly … This is a way that would make more sense than building more bridges and having more trucks driving.”